Hawai’i’s United States Senator Mazie K. Hirono, whose service on the Senate’s Judiciary Committee, if nothing else, has earned her national attention for her informed, outspoken views, is someone whose story, example, and ways of doing and serving are instructive and inspiring for all, tells quite the story in her newly publisher memoir, Heart of Fire: An Immigrant’s Story (Viking). That she is the first Asian American woman in the Senate, and its only immigrant is but part of that story.

“If a life can be called implausible, Mazie Hirono has lived it. In Heart of Fire, she tells an astonishingly compelling story. As a child born in postwar Japan, she crossed an ocean with her brother and mother, grew up in poverty in paradisiacal Hawaii, and emerged as a fiery voice and agent of change in the male-dominated, rough-and-tumble worlds of American politics. Powerful, poignant, and beautifully told, Heart of Fire is her inspiring, singular story.” —George Takei.

“With both ferocity and compassion, Hirono chronicles her experiences in Congress, exposing the rampant hypocrisy and illogical behavior she has witnessed. At the same time, warmth and love shine through, as she attributes her success and determination to the example set by her mother. A heartfelt and fiery political memoir and immigrant story.” —Kirkus Reviews.

Joining Senator Hirono in conversation this evening will be Pulitzer Prize-winning novelist and cultural historian and commentator, Viet Thanh Nguyen, who recently did an Elliott Bay virtual reading for his new novel, The Committed (Grove). 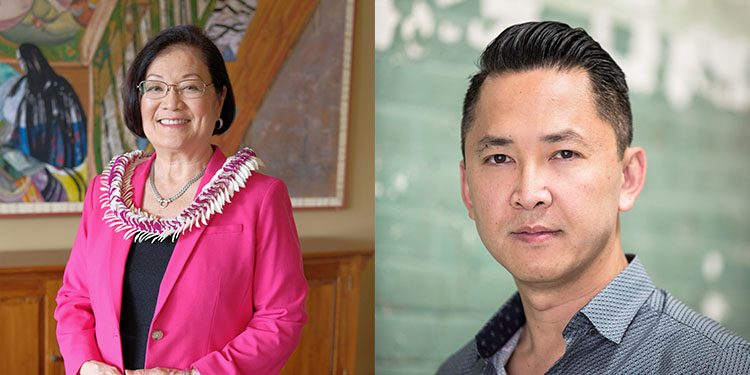