Published in India and the UK last fall, journalist and commentator K.S. Komireddi’s first book, Malevolent Republic: A Short History of the New India (Hurst/Oxford University Press), has caused a stir, especially in India where things are and have been particularly stirred up of late.

"What makes Komireddi's narrative interesting, and more importantly fair, is the care he's taken to look at all leaders from Nehru to Modi in equal light . . . The book . . . merits a wider audience. Here, for a change, is a critic of the present order who is fair-handed even if he is a bit harsh in his anger at the political evolution of independent India." -- Siddharth Singh, Open Magazine.

"Kapil Komireddi is a writer of flair, originality, and, above all, an absolute independence of mind ... his ability to see through posturing and prejudice makes his work both distinctive and compelling. This book deserves to be widely read within India and beyond." -- Ramachandra Guha.

Joining Kapil Komireddi in conversation will be Dominic Green, Deputy Editor of the US edition of The Spectator, a jazz guitarist and musical arranger, and the author of several works of history, with The Religious Revolution forthcoming from Farrar, Status & Giroux.

Malevolent Republic: A Short History of the New India (Hardcover) 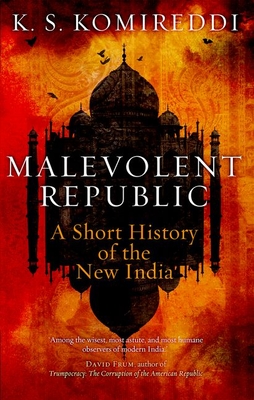