In 2008, the American economy collapsed, taking with it millions of Americans’ jobs, homes, and life savings. The ensuing financial crisis was devastating, and many are still feeling its effects today. But despite the crisis, the US government has yet to implement policies that would prevent a repeat of the Great Recession. Why is that?

Kerry Killinger, the former CEO of Washington Mutual Bank, and Linda Killinger, the former vice chair of the Federal Home Loan Bank of Des Moines, join us via livestream with a critical analysis of the actions that led to the financial crisis—and to sound the alarm about how we may be on track to repeat our same mistakes. With insight from their book Nothing Is Too Big to Fail: How the Last Financial Crisis Informs Today—all proceeds of which will be donated to charity—they hold a microscope to the very policies and corruption that led to the major economic recession. By exploring the shrinking middle class, escalations in racial injustice, and current fiscal policies, they argue that our economy is in a fragile place, barely strong enough to survive a shock caused by an international conflict, cyberattack, or global pandemic. But they believe no institution, government, or country is “too big to fail,” and that we can learn from our past mistakes and take action to return our country’s economic system—and democracy—to one that is secure.

Kerry Killinger was the chairman, president, and CEO of Washington Mutual Bank. He is a chartered financial analyst (CFA) and a fellow in the Life Management Institute. He was chair of the National Education summit of Achieve and American Banker’s Banker of the year, received President George H.W. Bush’s Points of Light Award for his philanthropy, was vice chair and chair-elect of the Financial Services Roundtable, vice chair and chair-elect of the Federal Reserve’s Thrift Industry Advisory Council, and was vice chair of the Federal Home Loan Bank of Seattle. He was elected to the American Society of Corporate Executives. He is currently the CEO of Crescent Capital.

Linda Killinger was vice chair of the Federal Home Loan Bank of Des Moines and chair of its audit/finance committee. She was also a consulting partner in an international accounting firm specializing in strategic planning and merger/acquisitions for financial institutions. She was the publisher and editor of Overseas Business magazine. Prior to that she was appointed by Governor Robert D. Ray as the director of administration for the Iowa Department of Human Services, which included the prison system, mental health hospitals, AFDC and other human service programs. She was appointed by Governor Tom Vilsack to chair his Committee for a Comprehensive Housing Strategy for Iowa. She currently is the CEO of Olympic Consulting.

In 2002, Linda and Kerry founded the Kerry and Linda Killinger Foundation which has the mission of public policy reform and social and racial justice, building community and access to the arts.

Nothing is Too Big to Fail: How the Last Financial Crisis Informs Today (Hardcover) 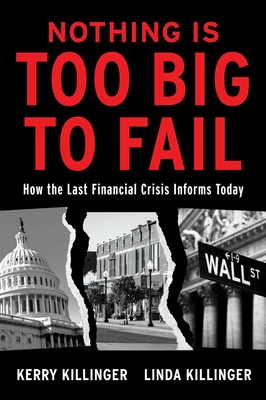