A book we first learned of months ago when places distant and beyond our own four walls seemed unfathomable, Hannah Kirshner’s captivating Water, Wood, and Wild Things: Learning Craft and Cultivation in a Japanese Mountain Town (Viking) will engage the reader whether or not such travels do materialize. Hannah Kirshner, a writer, artist, and food stylist, grew up on a farm outside Seattle, went east (within the U.S.), then, at a pivotal juncture, received an invitation to apprentice with a ‘“sake evangelist” in a misty Japanese village.’ Thus one life became something quite different - all of this written with grace and insight in this beautiful book.

“In Kirshner’s explorations and excavations, we navigate the pulls of place and identity—Water, Wood, and Wild Things settles us into Yamanaka, and alongside the folks who live there. Kirshner is both participant and observer, humbly and tactfully weaving a portrait of a history, its mores, and how they’ve changed. But, above all, she listens—allowing the community to tell their story, and allowing us to view the tapestry she’s painted alongside them. Water, Wood, and Wild Things is a trove and a boon—we can’t help but feel grateful that Kirshner brought us along for the journey.”—Bryan Washington.

“Kirshner’s beautifully illustrated and worded depiction of Japanese craft is artfully grounded in nature’s four seasons alongside meticulous food preparation rituals. With each turn of the page, you can almost hear Kirshner sliding open yet another wooden paneled door to reveal a shokunin who refuses to let their craft fade. Water, Wood, and Wild Things wonderfully brings a myriad of haptic, visual, and aromatic taste sensations of Japan that individually tantalize within a perfect dashi broth of storytelling.”—John Maeda.

That very same John Maeda, the Seattle author of The Laws of Simplicity and Redesigning Leadership, among other works, and Lori Matsukawa, the Emmy Award-winning former news anchor at KING-TV, will join in this evening’s conversation.

Co-presented by the Friends of Asian Art Association. 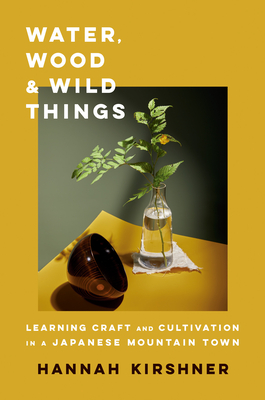