Originally scheduled a year ago, to the best of our recollection, this program featuring restorative justice activist Danielle Sered, in conversation with Seattle creative, community organizer, abolitionist, educator, and attorney Nikkita Oliver, was originally scheduled but then scuttled as most everything was with the onset of the pandemic. The subjects Danielle Sered addresses in her book, Until We Reckon: Violence, Mass Incarceration, and a Road to Repair (The New Press) are no less timely than when this book first appeared.

“Danielle Sered provocatively offers and backs up a vision that actually promotes real healing for crime survivors and improves community safety. A must-read for anyone who truly wants to dismantle mass incarceration.”—Nick Turner, Vera Institute of Justice.

“Recently, a loose network of gun-crime victims, as well as men and women who’ve survived sexual assault, violent robberies, and other violations of the social contract . . . have emerged with an alternative policy vision. Among its many champions is Danielle Sered, [who leads] pioneering efforts to provide community-based support to young men of color who’ve been harmed by violence . . . and those responsible for crimes.”—Sarah Stillman, The New Yorker.

Danielle Sered founded and is executive director of Common Justice, has worked for other related organizations, and long been active with various groups and coalitions seeking restorative justice.

Nikkita Oliver is the executive director of Creative Justice, an arts-based alternative to incarceration and a healing engaged youth-led community-based program.

Until We Reckon: Violence, Mass Incarceration, and a Road to Repair (Paperback) 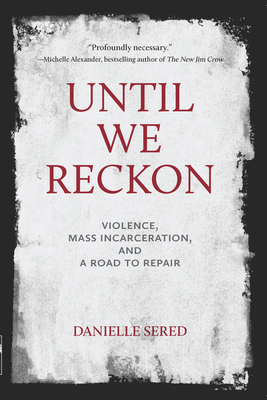