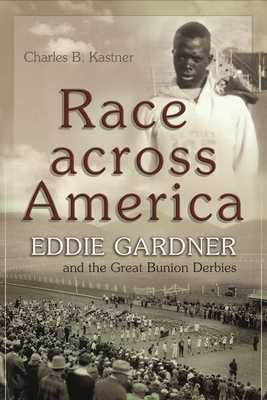 On April 23, 1929, the second annual Transcontinental Foot Race across America, known as the Bunion Derby, was in its twenty-fifth day. Eddie "the Sheik" Gardner, an African American runner from Seattle, was leading the race across the Free Bridge over the Mississippi River. Along with the signature outfit that earned him his nickname--a white towel tied around his head, white shorts, and a white shirt--Gardner wore an American flag, a reminder to all who saw him run through the Jim Crow South that he was an American and the leader of the greatest footrace in the world.

Kastner traces Gardner's remarkable journey from his birth in 1897 in Birmingham, Alabama, to his success in Seattle, Washington, as one of the top long-distance runners in the region, and finally to his participation in two transcontinental footraces where he risked his life, facing a barrage of harassment for having the audacity to compete with white runners. Kastner shows how Gardner's participation became a way to protest the endemic racism he faced, heralding the future of nonviolent efforts that would be instrumental to the civil rights movement. Shining a bright light on his extraordinary athletic accomplishments and his heroism on the dusty roads of America in the 1920s, Kastner gives Gardner and other black bunioneers the attention they so richly deserve.

Charles B. Kastner is a long-distance runner and the author of The 1929 Bunion Derby: Johnny Salo and the Great Footrace across America. To learn more about Chuck Kastner, visit CharlesKastner.com.