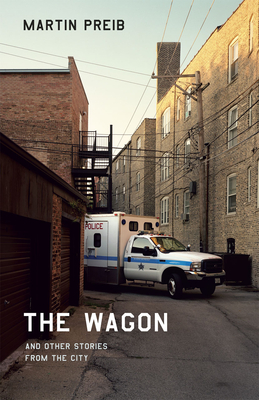 By Martin Preib
Email or call for price
Special Order: Not Currently Available

For the sake of his writing, Preib joins the Chicago Police Department, and these essays are the stunning result. City life at its rawest and ugliest, tempered by reflective insight and moving compassion toward our least powerful citizens. Preib has crafted a challenge to our hardened hearts and chilled souls, and a poignant meditation on the writer's craft and purpose in an age morally adrift.

Martin Preib is an officer in the Chicago Police Department—a beat cop whose first assignment as a rookie policeman was working on the wagon that picks up the dead. Inspired by Preib’s daily life on the job, The Wagon and Other Stories from the City chronicles the outer and inner lives of both a Chicago cop and the city itself.

The book follows Preib as he transports body bags, forges an unlikely connection with his female partner, trains a younger officer, and finds himself among people long forgotten—or rendered invisible—by the rest of society. Preib recounts how he navigates the tenuous labyrinths of race and class in the urban metropolis, such as a domestic disturbance call involving a gang member and his abused girlfriend or a run-in with a group of drunk yuppies. As he encounters the real and imagined geographies of Chicago, the city reveals itself to be not just a backdrop, but a central force in his narrative of life and death. Preib’s accounts, all told in his breathtaking prose, come alive in ways that readers will long remember.

Martin Preib is an officer with the Chicago Police Department. His essays have appeared in the Virginia Quarterly Review and Tin House.